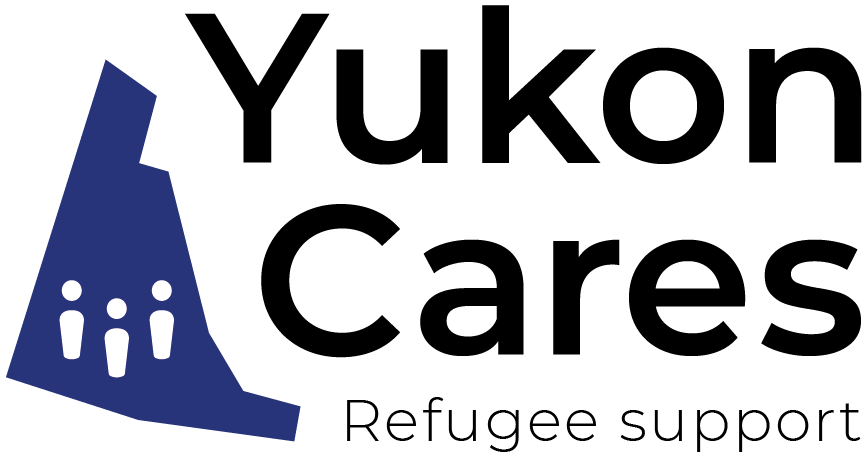 After almost two weeks in the city, the Kyakuwa family says they are feeling very welcome in their new community.

The family of eight arrived May 8 after a journey that took them from a refugee camp in Botswana to Vancouver and on to Whitehorse.

The Kyakuwas are the most recent family to be sponsored by Yukon Cares in partnership with the Catholic Diocese of Whitehorse.

“We really feel at home,” mother Susan said in an interview last week.

Indeed, as he and Susan talked of their new life in Canada, their five children appeared very comfortable in their new home.

At one point, one little girl happily rolled around on the floor, while another was digging out toys on a shelf.

The eldest daughter held the baby of the family, while their son sat quietly seeming to take it all in. In the background, cartoons played on TV.

Later in the day, there were appointments to get to with the help of community volunteers all working to help the family as they continue becoming part of the community.

Already, both Samuel and Susan have taken language tests at the multicultural centre and are planning to pursue some English lessons to improve their communication skills.

And while there’s less than a month left in the school year, the family has visited the school their kids will be attending.

As Samuel said, volunteers have taken the family many places around the city, and the generosity has been overwhelming.

“We can’t believe people are so friendly,” he said.

He recalled the crowd that welcomed them when they arrived, and the volunteers who brought them to the house they’re now staying in. Donations from Whitehorse residents mean the family members have what they need.

Their journey has been a long time coming, going back to the early 2000s – during the conflict between Sudanese Arabs and African Sudanese in the country.

“That was the beginning of my family to suffer,” Samuel said.

His parents were killed, and Samuel and Susan soon found themselves fleeing the bombings and attacks with their young daughter, now the eldest of five kids in the family.

It was a horrendous exile as the family fled through the Central African Republic, the Democratic Republic of Congo and Zambia.

They were even jailed before they were finally sent to a refugee camp in Botswana in 2011.

It was there the family eventually qualified for resettlement – interviews, paperwork and much waiting followed as they continued to live in a tent set up in a refugee camp.

When it was learned that Canada had agreed to accept the family, they were given a small Canadian flag pin, something Samuel said gave them hope as they continued to wait for word on when they might be able to leave the refugee camp.

At the same time though, he wondered if it was really true.

As he noted, the refugee camp had its share of corruption. There have been many cases of valid refugee claimants losing their resettlement opportunities to the corruption as others are moved up to take their place.

There were final medical checks and dealings between the Canadian government and the UN.

Finally, in 2017, the Kyakuwas were issued an exit permit, bearing the names of three individuals they did not know along with their own names.

The corruption that Samuel had worried about was now impacting their own status.

What followed for the family were three weeks spent in the airport, unable to board their flights and leave the country, facing an uncertain future. Eventually, they were told they wouldn’t be leaving Botswana.

“We cried. We lose all hope,” Samuel said.

Not only were they not able to resettle, but they had also closed up their lives in the refugee camp.

The kids had been taken out of school and so on. They were classified as new arrivals at the refugee camp they had just left.

While a friend assured him that his family would someday get out of the refugee camp and go to Canada, it was not so easy to believe.

So when a call came in from Raquelle De Queiroz of Yukon Cares that the group would sponsor the family, Samuel had major doubts that it was for real.

“I couldn’t believe,” he said. It took a couple of weeks for the family to really believe that efforts were underway to help them leave the refugee camp.

Eventually, they were told the visa had been issued and that checks had been done and that they would leave sometime soon.

On May 2, Samuel was given papers showing the family would be departing the country.

As Samuel noted though, he had seen other families from the refugee camp handed the visa and airline tickets in the past.

It was only as they were being driven to the airport in Francistown, Botswana that the driver was stopped on the road and handed the papers that the family was provided the paperwork for each member showing they would depart Botswana.

It’s paperwork that now sits in a large folder full of documents labelled for each family member and one that Samuel is pleased to show.

“Confirmation of Permanent Residence” it reads, with details that follow on the individual – in this case, Samuel.

“This one is real,” he said. He recalled getting through security and boarding the plane that would take him and his family from Francistown to Vancouver.

Arriving in the B.C. city, Samuel said the family was grateful to experience their first Canadian welcome after such a long flight, greeted by friends of Yukon Cares members who brought warm coats and clothes for the family.

With just a few hours before they were to catch their flight to Whitehorse, those who were on hand to give them clothes more suited to their new environment took them to an eatery in the airport.

It was then on to the final leg of the journey to get them to their new home.

As the family settles into life in Whitehorse, Samuel said they hope to be more involved with Yukon Cares and organizations to help out other people in the same way.